In 2019, Shyla Germain, who works in Shareholder Relations at Sealaska, was sitting in the lobby of the company headquarters talking to people about enrolling to become a Sealaska shareholder. It was during Celebration, and many Tlingit, Haida and Tsimshian people filled the streets of downtown Juneau.

She spoke with many people that day, always enthusiastic and confident that anyone who was eligible would want to enroll.

A conversation with a young man helped provide her with even greater perspective. This young man was known to be strong in his culture, lived in a traditional community, spoke his language and more.

“I asked him what his blood quantum was and he was like, ‘I don’t even know and I don’t care to know, I don’t think it’s important. I think if you’re a child or grandchild of a tribe
or clan, that’s who you are, you shouldn’t have to prove a blood quantum,’” Germain recalled.

Germain was already unhappy that her children would not be eligible when they turned 18. But the young man’s words ignited a fire in her, and from that point on, she made it her mission to speak on behalf of descendants – regardless of their blood quantum – as a Sealaska employee.

Many times in the years since, she gave impassioned testimony to the Sealaska board on the issue. When the resolution passed during Sealaska’s annual meeting this year, Board Chair Joe Nelson invited Germain to address shareholders. 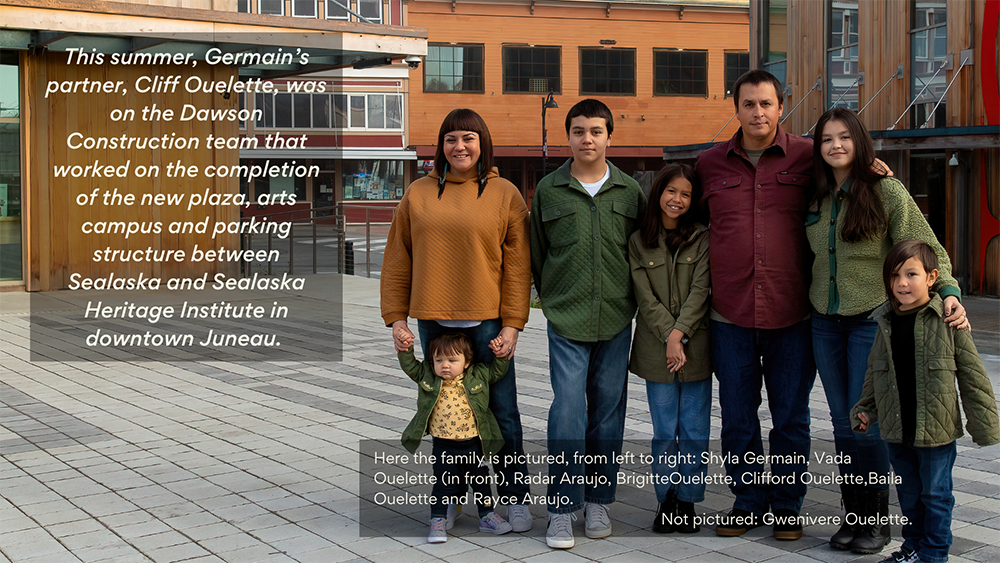 “In any organization, the people working the front lines have the most powerful voice,” Nelson said, referring to Germain’s daily conversations with shareholders as part of her job in Shareholder Relations. “This is an issue she’s passionate about, and she didn’t let us forget it. It made a world of sense for her to share that passion at the annual meeting.”

Germain isn’t the born crusader type. She said it was her first time speaking up in this manner but speaking up is a skill she’s working on developing. At the annual meeting she shared these words at Nelson’s invitation:

“There was nothing worse than having your children, grandchildren, great-grandchildren come into my office and me having to deny them and turn them away and make them leave by telling them their blood quantum isn’t enough,” she said, her voice choked with emotion. “So today I wear the pride I have on my sleeve, and I just want to thank every shareholder … for voting in favor of the blood quantum resolution. So gunalchéesh!”

Now that the resolution has passed, there are a lot more Sealaska shareholders in Germain’s house. Her partner, Cliff Ouelette, just enrolled. He is Tlingit, originally from Sitka;
his maternal grandmother was adopted out and no one knows where she was taken. Growing up, his culture was not very visible in his life. Around 15 years ago, he enrolled with Sitka Tribe of Alaska and began to seek out more connections to culture.

His relationship with Germain has also been part of that process. Between the two of them, they have seven children. None of them are 18 yet, but when they are, they’ll all be eligible to be shareholders of Sealaska.

“When he found out he was eligible, his first question was, ‘What does that mean for hunting?’” Germain laughed. “I said, ‘That will come next but we gotta work on that.’”

Language efforts and the Board Youth Advisor program took center stage at the first board meeting of the year. At a board meeting held on Friday, Jan. 27, Sealaska’s Board of Directors approved a one-time $250,000 increase in funding for language programming from the Sealaska language fund, bringing this year’s contribution to $750,000. The fund, …

As part of our ongoing efforts to connect with shareholders like you on important issues, Sealaska invites you to complete our 2023 Shareholder Engagement Survey. This survey is vital to understanding your priorities and meeting your expectations for how Sealaska engages with shareholders.   To take the survey, please visit www.sealaskasurvey.com to complete the survey online. You can …

Since the elimination of the blood quantum requirement in June 2022, Sealaska has welcomed over 2,100 new shareholders. Sealaska hosted a virtual shareholder orientation to provide our new shareholders with more information on Sealaska, as well as what to expect as a shareholder moving forward. Board Chair Joe Nelson served as the host and was joined …

Sealaska shareholders are now able to view and download their IRS Form 1099-DIV for 2022. Printed 1099 tax forms will be mailed on or before Jan. 27.

Shareholders Nominated for Work on “Molly of Denali” at the Emmys

“Molly of Denali” is one of the biggest shows on PBS — so big that it was recently nominated for the Children’s and Family Emmys in two categories: Outstanding Preschool Animated Series and Outstanding Writing for a Preschool Animated Program. The team behind that outstanding writing includes four Sealaska shareholders: Frank Henry Kaash Katasse, Vera …