Following the June 25 approval of a shareholder resolution to eliminate the one-quarter blood quantum requirement from the eligibility criteria for Sealaska’s Class D (Descendant) shares, Sealaska is now pursuing justice on behalf of another group of disenfranchised descendants — those who were born before Dec. 18, 1971, and whose blood quantum is lower than one-quarter.

Dec. 18, 1971 is the date the Alaska Native Claims Settlement Act was signed into law. ANCSA defined eligibility to enroll in the newly created Alaska Native corporations as “a citizen of the United States who is a person of one-fourth degree or more Alaska Indian (including Tsimshian Indians not enrolled in the Metlakatla Indian Community), Eskimo, or Aleut blood, or combination thereof.” This definition established the one-quarter threshold as federal law.

At the time of ANCSA’s passage, there was no provision to include future generations — descendants — in the newly formed corporations. A later series of amendments, known as the 1991 Amendments, created the opportunity for Native corporation shareholders to approve inclusion of descendants who were born after the Dec. 18, 1971 cutoff through the creation of Class D stock. The criteria for eligibility for Class D shares was left to each corporation.

Changing the original shareholder eligibility requirements — those that apply to Tlingit, Haida and Tsimshian relatives born before Dec. 18, 1971 — can only be done by amending ANCSA.

Amending ANCSA would require the support of other Alaska Native corporations; a sponsor for the legislation from Alaska’s congressional delegation; and the ultimate approval of the change by Congress. Each of these steps could take quite a while. Half of Alaska’s 12 regional corporations haven’t even created descendant stock yet,
and only two others have eliminated blood quantum from their eligibility requirements for descendants. 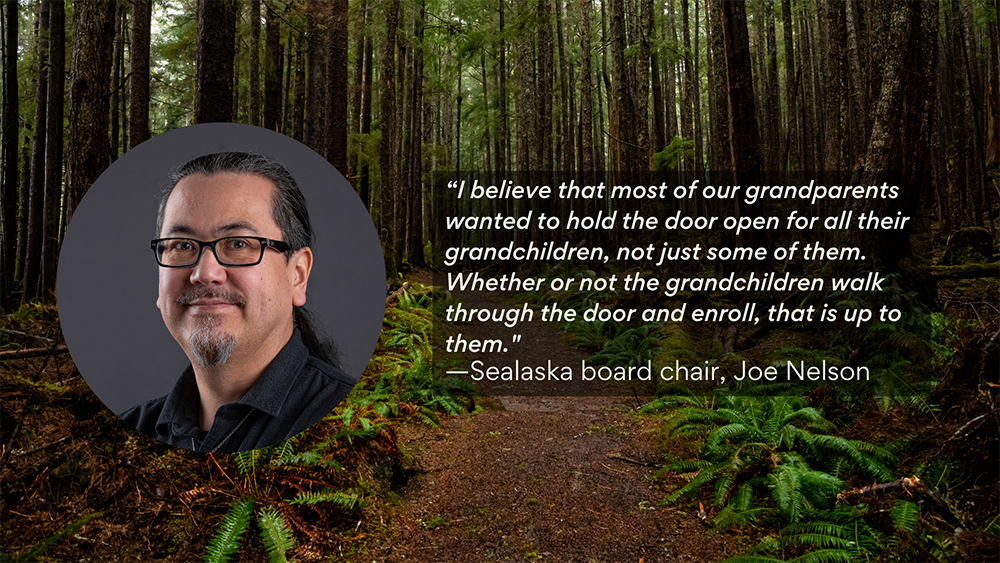 Language efforts and the Board Youth Advisor program took center stage at the first board meeting of the year. At a board meeting held on Friday, Jan. 27, Sealaska’s Board of Directors approved a one-time $250,000 increase in funding for language programming from the Sealaska language fund, bringing this year’s contribution to $750,000. The fund, …

As part of our ongoing efforts to connect with shareholders like you on important issues, Sealaska invites you to complete our 2023 Shareholder Engagement Survey. This survey is vital to understanding your priorities and meeting your expectations for how Sealaska engages with shareholders.   To take the survey, please visit www.sealaskasurvey.com to complete the survey online. You can …

Since the elimination of the blood quantum requirement in June 2022, Sealaska has welcomed over 2,100 new shareholders. Sealaska hosted a virtual shareholder orientation to provide our new shareholders with more information on Sealaska, as well as what to expect as a shareholder moving forward. Board Chair Joe Nelson served as the host and was joined …

Sealaska shareholders are now able to view and download their IRS Form 1099-DIV for 2022. Printed 1099 tax forms will be mailed on or before Jan. 27.

Shareholders Nominated for Work on “Molly of Denali” at the Emmys

“Molly of Denali” is one of the biggest shows on PBS — so big that it was recently nominated for the Children’s and Family Emmys in two categories: Outstanding Preschool Animated Series and Outstanding Writing for a Preschool Animated Program. The team behind that outstanding writing includes four Sealaska shareholders: Frank Henry Kaash Katasse, Vera …